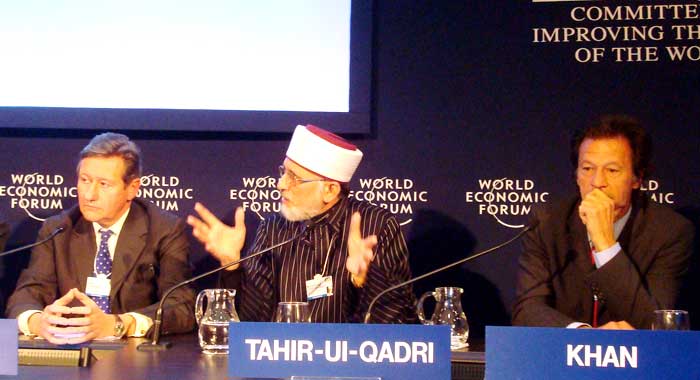 Dr Tahir-ul-Qadri speaking at World Economic Forum in Davos on 27 January 2011
(Also on the panel, on the right Mr John Chipman and on the left Mr Imran Khan)

Dr Muhammad Tahir-ul-Qadri has said that terrorism has adversely impacted the economies of the developing and the developed countries. Terrorists have no religion. The phenomenon of terrorism has not appeared suddenly out of nowhere. Rather it has evolved through the phases of radicalism and extremism and terrorists are used as fodder for the cannons of the masterminds of this evil. He said that there are five phases through which terrorism passes. Radical and conservative attitudes are ideological in nature and give birth to militancy and terrorism. 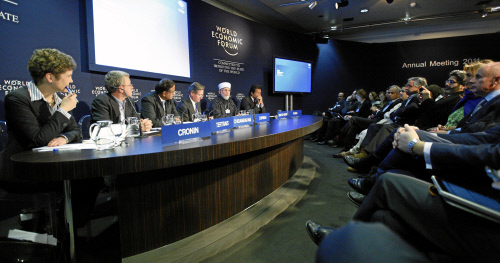 According to the press statement issued by the Directorate of Media, Dr Muhammad Tahir-ul-Qadri expressed these views while addressing the annual meeting of the World Economic Forum in Davos. He is the only Islamic scholar from across the world who has been invited to speak at the World Economic Forum on ‘The Reality of Terrorism’. Dr Tahir-ul-Qadri said that terrorism has no religion and bracketing this anti-human practice with such peaceful religion as Islam is not correct. He further added that the handful of extremists who are the present-day custodian of the Kharjitte thought have nothing to do with Islam. “Those who cause havoc and mayhem through shedding of innocent blood are the criminals who deserved to be meted out exemplary punishment”, he said. 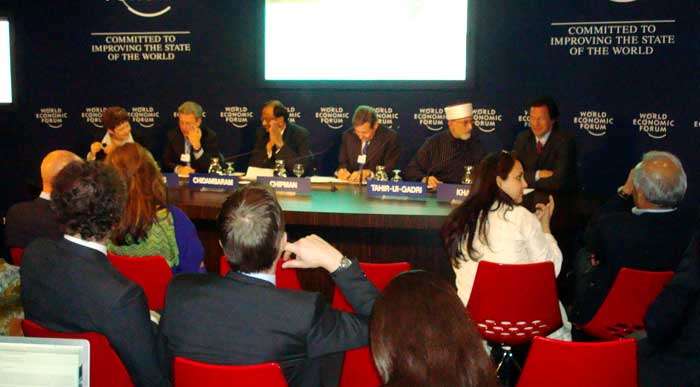 He underlined the need of understanding the Islamic concept of Jihad in correct perspective. Jihad, he said, represents the culmination of efforts made for the establishment of peace and has five broad categories namely spiritual, intellectual, social, political, and defensive. Islam, he maintained, strictly forbids bringing any harm to unarmed people, women, and the old during the course of war. The actions of handful of bigoted elements cannot be dubbed as Jihad. He said that Islam does not recommend any Jihad, which allows people to do suicide bombings and slaughter innocent people. 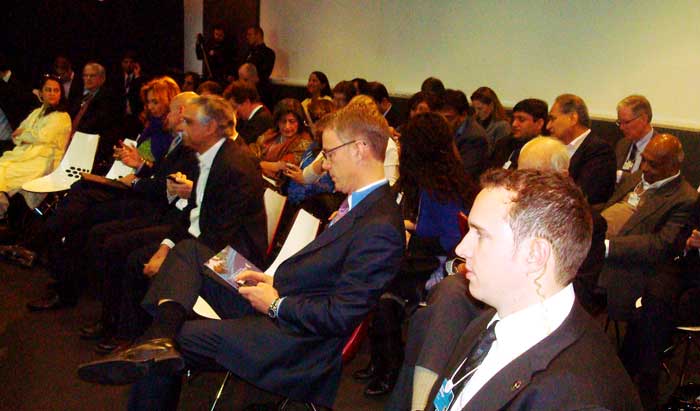 Dr Tahir-ul-Qadri said that the root causes of terrorism need to be addressed if terrorism is to be eliminated comprehensively. He stressed the need of taking urgent steps for eradication of poverty from the developing world. He further said that the policy of associating terrorism with religions should be abandoned as no religion of the world including Islam approves of violence and the killing of humanity. He said that in order to bring the humanity closer, there is a need to launch interfaith dialogue among civilizations and build bridges. “This calls for highlighting commonalities,” he opined.Dr Tahir-ul-Qadri said that in order to effectively deal with counter-terrorism there is a need to promote social cohesion, multiculturalism and integration. He added that the model of isolation and assimilation should be avoided to promote social cohesion. 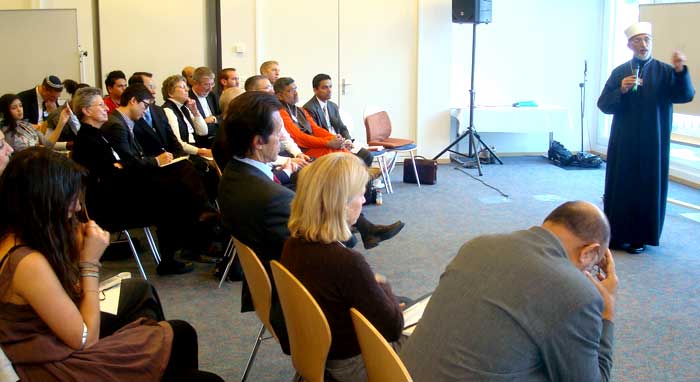 He said that wrong terminology has been applied since 9/11. Therefore it is vital for the international community to de-link terrorism from Islam and to avoid terminology such as Islamist, jihadi, Islamic terrorist. He said terrorists have no religion and that they should be regarded as criminals only. He said that by using these terms the terrorist groups portray the war against terrorism as the war against Islam and this helps them to brainwash young people against the western world.

Dr Muhammad Tahir-ul-Qadri spoke about the international situation and the increase of global terrorism after 9/11 and presented solutions on tackling the issue.Discussing the solutions, he explained that terrorist groups exploit the political situations of Palestine, Afghanistan, Iraq as well as Pakistan and India. Dr Qadri said that these international disputes and political situations must be resolved in order to tackle international terrorism effectively. He elaborated the importance of promoting educational programmes on peace and harmony in schools, colleges, universities and among the general public as well as among the clerics (Ulema). He said that programmes to enhance conflict resolution skills should be introduced in order to effectively resolve regional and national conflicts. 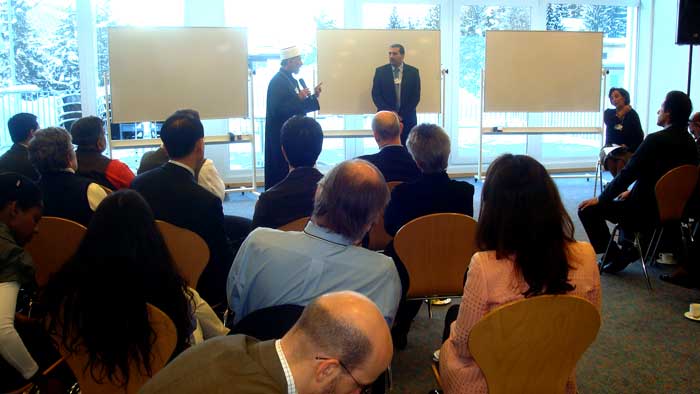 Mr John Chipman, Director-General and Chief Executive, International Institute for Strategic Studies (IISS) introduced Dr Tahir-ul-Qadri’s historic fatwa on terrorism and asked about its impact at the global level and in the Arab world. Dr Tahir-ul-Qadri informed the participants about its importance and its international impact and explained that its most prominent feature is that it is unconditional - without any ifs and buts hence there is no room for exception for terrorist acts. 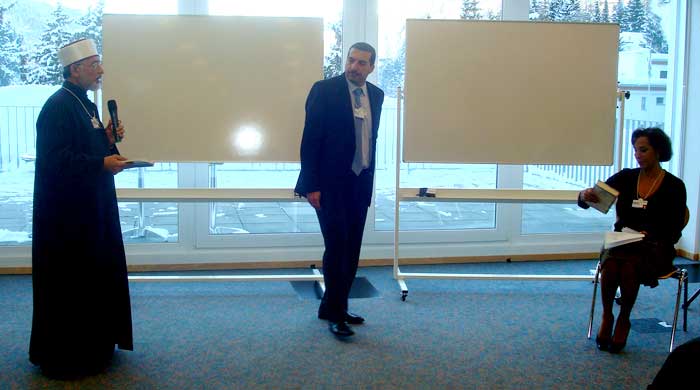 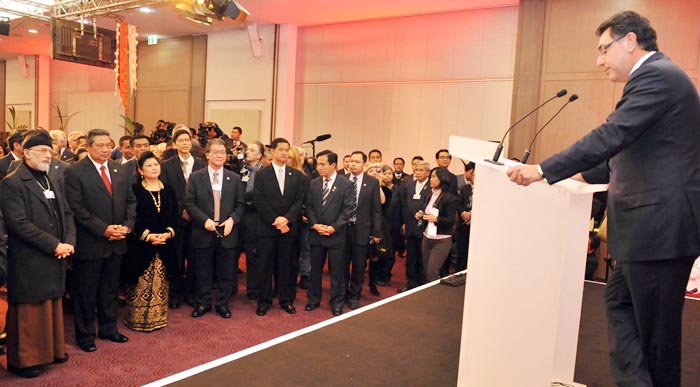 Dr Tahir-ul-Qadri standing with the President of Indonesia, Mr Susilo Bambang Yudhoyono
at a reception during the World Economic Forum on 27 January 2011 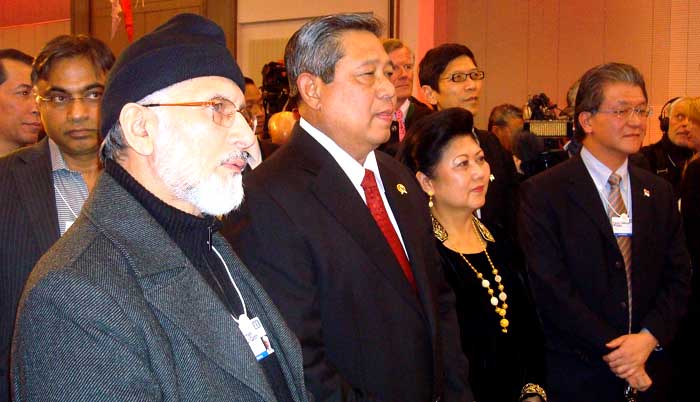