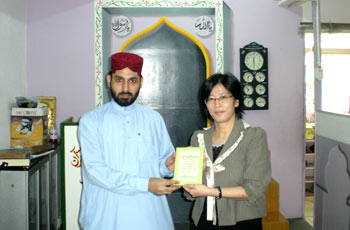 The Hong Kong Taoist Association School (HKTAS) held a meeting with Hafiz Naseem Khan the chief Imam at Idara Minhaj-ul-Quran Hong Kong. A delegation of four people visited the Idara. Among them was the Principal, Ms Lau Wai Chun.

HKTAS accepts a number of Non-Chinese Speaking Students (NCSS) in Hong Kong. Pakistani students are the largest group in the school. So, the Principal wanted to understand the basics of Islam and know more about the Pakistani culture and the needs of the students so that a better education can be provided.

First, Hafiz Muhammad Naseem Khan welcomed the delegation and expressed his happiness and gratitude that the school chose to visit Idara Minhaj-ul-Quran. Next, he explained the basics of Islam to the principal and other teachers. He talked about the compulsory prayers, fasting, charity and the pilgrimage to Makkah.

Then, the principal asked about the activities the Idara conducts. Hafiz Muhammad Naseem Khan gave a detailed account of the activities held on daily or weekly basis. He said the Idara runs regular Quranic classes for about 160 students. Besides, he informed that there are 5 regular prayers held on different times of the day. Moreover, he highlighted the other activities such as weekly gatherings, Friday prayers and Milad Shareef conducted at the Islamic Center. 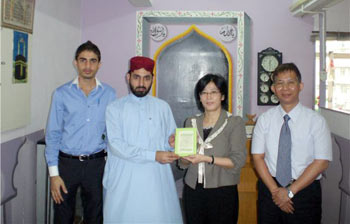 After that, Hafiz Naseem khan talked about the overall mission of the Minhaj-ul-Quran International and its worldwide presence. He reported that Minhaj-ul-Quran carries a whole range of religious, social and welfare activities. Giving example of such activities, he mentioned that the Minhaj-ul-Quran is running a number of educational projects within and outside Pakistan as well as providing medical care to needy and helping those affected by natural disasters worldwide.

The meeting was concluded with the presentation of an appreciation certificate to the Idara Minhaj-ul-Quran. Ms Lau presented the certificate and expressed her thankfulness and appreciation to Hafiz Muhammad Naseem Khan for all the information he has provided.