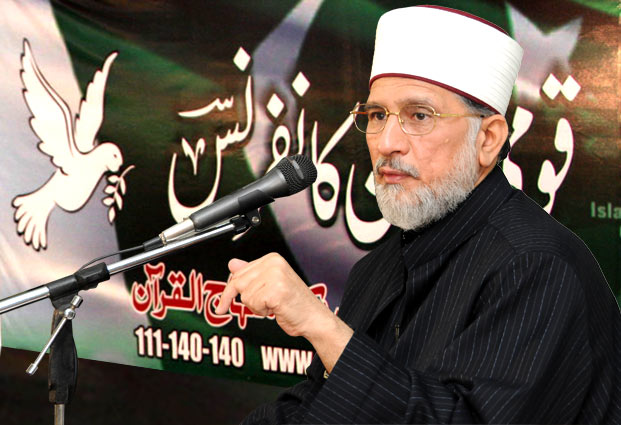 Addressing the participants and leaders of different political and religious parties who attended the “National Peace Conference” held under aegis of Minhaj-ul-Quran International on April 9, 2009, Shaykh-ul-Islam Dr Muhammad Tahir-ul-Qadri said: “Islam is a religion of peace and harmony. There is no need to establish it here as the Quranic injunctions and 1400-year history of Muslims are clear evidence authenticating this reality. The Holy Quran has equated the killing of one person with the killing of entire humanity and protection of one person with the protection of entire humanity. The Holy Prophet (saw) has himself described a Muslim as someone by whose hands and tongue other Muslims are not hurt and remain safe. Leave alone unjustly killing anyone, a person using foul and immoral language against others could not be called a Muslim.

“There is a constant talk of peace in the entire world today and war on terror is being fought to establish elusive peace. There is no denying this truth that terrorists are not only enemies of peace but also of entire humanity. The peaceful forces should struggle against them but the questions arise here as to who fanned terrorism? Who opened this front? The situation was not as volatile as today ten years ago. Where have the army of terrorists appeared from all of a sudden? Is it not likely that the global forces fighting terrorism have also been responsible in creating this monster and now the whole world is being made victim to clash of civilization in the name of establishment of peace?

“Condemnation of terrorism is not sufficient for the establishment of peace only. Rather real enemies of peace should be identified first. The second important thing is that Northern Areas of Pakistan, FATA, Wazirastan, and Swat have historically been known as peaceful areas where religious-minded but simple people reside. These areas are even without basic necessities of life. Majority of people are poor and earn their livelihoods through day-long labour.

“What revolution has come about in these regions in a period of last three years that these people have turned against their country and started confronting army and other security forces? From where have arms and ammunition come in large quantities and who is providing people with expertise to take on a state and its army? Who is providing training, weapons and money to terrorists? As it is now being openly and clearly said that foreign powers are supporting terrorism, what role has our former and present governments including the provincial ones performed to address the problem? Why did they allow it to grow amidst our polity? Drone attacks have become a routine affair in the tribal areas of Pakistan. The first thing that needs to be mentioned here is that Drone attack constitutes an attack on security and sovereignty of an independent country. Why did the government allow the US to violate our territorial integrity and at what forum? Suppose these attacks are meant to target terrorists, why has no detail of these terrorists been published in the press? 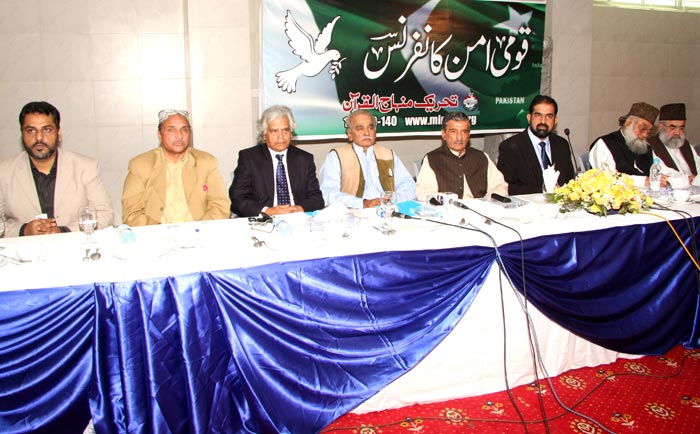 “In the similar manner, our army stakes claim to killing scores of terrorists each day but never has their identity been established? Local people are getting caught up in the crossfire between security forces and terrorists and are losing their lives for no fault of their own. The remainder of them, who are lucky enough to be spared, get maimed and injured for life. What type of peace is being established here? There is another noteworthy point that why are people who are involved in spreading mischief and who have even threatened the US many a time being spared and not taken out by US’ drone hits? Why it is so that many citizens of Pakistan have been picked up on mere suspicion but hundreds of people living in Afghanistan and adjoining areas who are involved in open warfare have been given carte blanche to operate?

“The semi-literate leaders and commanders of terrorist organizations brief media and unveil their plans to target their adversaries and still their location is not identified, which might result in their capture in this day and age of satellite. These questions are brain-teaser for a man with normal IQ and intelligence level. To top it all, what is matter of more concern is the fact that the longer the war on terror is getting, the more terrorism is spreading instead of getting eliminated.

“This war was exported to the tribal regions of Pakistan from Afghanistan and now it is directed at Quetta, Islamabad, Lahore, Dera Ismail Khan, Peshwar—the mainland Pakistan. The situation has reached such alarming levels that our Mosques, sacred places, religious institutions and hospitals are not being spared.

“We are, no doubt, living in critical and perilous times but our national habit of blame game or being content with expressions of condemnation could not protect us from this raging fire of extremism and terrorism. Whatever be the source of attack on our sovereignty be it external or internal, we need to formulate a serious and dynamic national policy. Major responsibility of taking much-needed initiatives rests on the government. Our parliament has already passed a consensus resolution against terror and there is a need to fully implement this national consensus into policy framework. Our national leadership including religious, political and military needs to act and act fast. Some points are instructive in this regard:


Views, Opinions and Analyses by Dignitaries and Politicians